Earlier this month I joined my family on an outing to see the world renowned concert pianist Murray Perahia.

Before the performance began I took a bit of time to photograph the concert hall. I attended Sonoma State as a student but was in my finishing semester when Weill Hall was complete. I will never forget the excited chatter that passed through the music department on the day that Yo-Yo Ma came to the school to spend time testing out the acoustics of the space. From what I heard he was impressed with Weill Hall.

As a graduated student – with slightly more free time – I was excited to explore the space, have a glass of champagne and mingle a bit.

It was a Friday night and everyone was dressed with flare. My eyes landed on two young woman that looked stunning. Gold shoes were the first thing that caught my eye. I could feel our mutual flutter of anticipation for the performance to begin.

Placing my champagne to the side, I asked them for a quick photo shoot before the bell rang to begin seating. 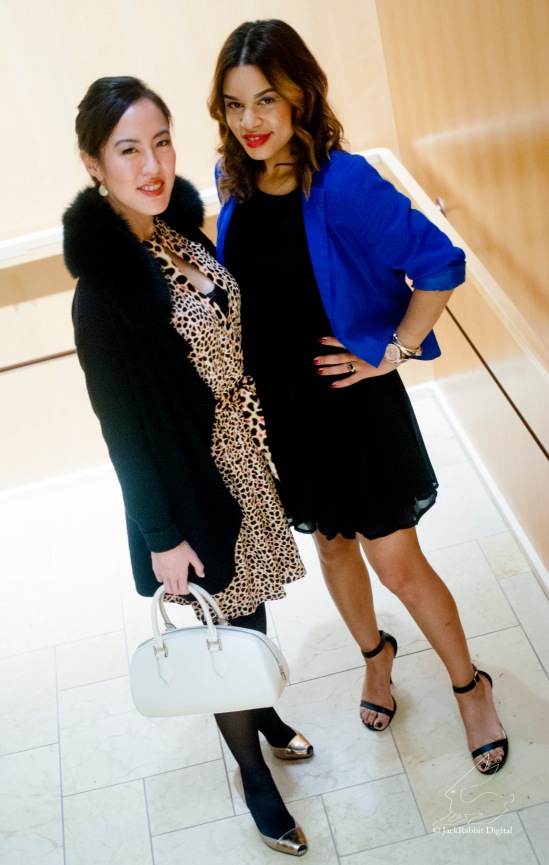 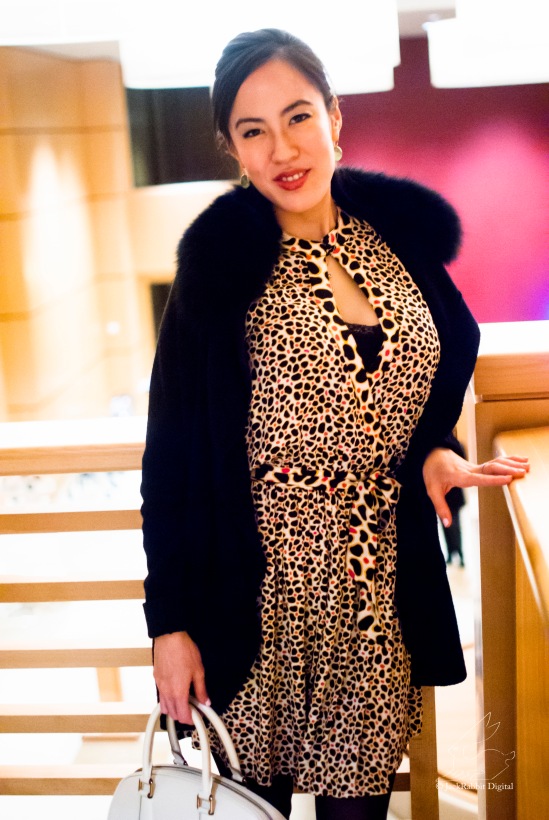 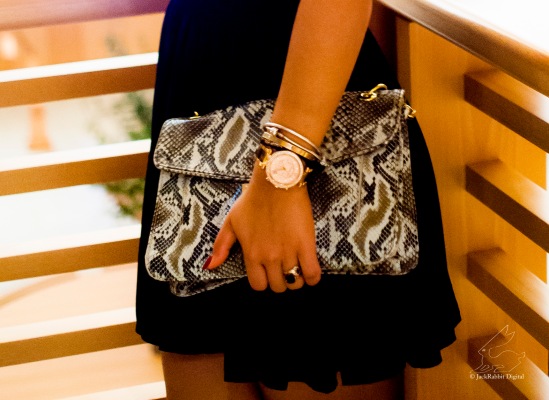 The performance did not disappoint. Perahia had crisp notation and flawless technique. Seldom have I listened to such a clean and intellectually brilliant performance. His playing felt warm and sensitive to the ear. His style was not of a dramatic nature but still managed to have a strong emphasis even with a more delicate and refined touch.  It was a positively lyrical experience, and I held on to each note as it was played. His recital included pieces by Mozart, Beethoven, Bach, Franck, and Chopin. I did not photograph the man himself due to restrictions. But I did capture the stage before he sat down to play.

If you are ever in the Sonoma Area I highly recommend attending a concert at the new Weill Concert Hall located on the Sonoma State University Campus.

I fall upon my pen in apologies for leaving all of my faithful readers for so long without a post. I started a photography studio and have been pouring all of my energy, tears, and joy into that project. But that said I have the urge to keep fashionmudra alive. You were my first experience, my first love of blogging and I don’t want to let you go. I have traveled the world and photographed places that sound and feel outside of myself such as Russia, England and Italy. But I have also discovered the uniqueness of my daily life in the Bay Area.  I can honestly say that fashion photography and in particular street photography have a certain quality to them them that I still crave with an itching need.

While I was attending the Napa Valley Film festival last November there were many moments when I needed to find a watering hole and a bit of R&R before heading to the next red carpet of choice. I found that  need fulfilled while having lunch at the Oxbow Public Market. Along with my meal I found myself people watching and taking in the mix of locals and tourists that were visiting Napa that day.

If my memory is correct the gentleman below was working at the book kiosk outside the restaurant. I snagged him for a candid moment outside as he was on his way out the door. He had really wonderful sense of himself and a quite self awareness in his style. 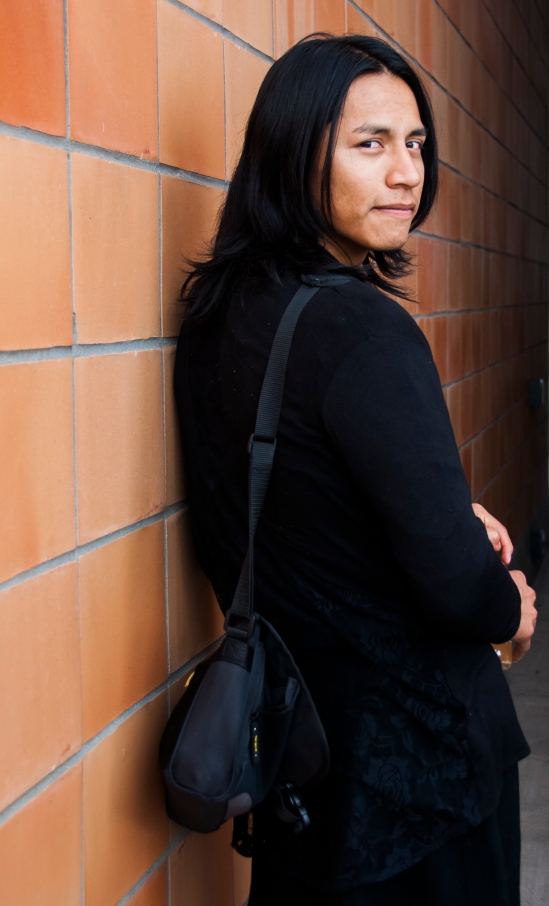 The lovely lady below was replacing the gentleman above at the kiosk, but before her shift started I photographed her as well. She struck me as being very comfortable in her skin and aware of what her world encompassed.

I thought that they both represented  a certain flavor of the place. They both had a persona that gave a sense of gravitas and had in my opinion a healthy investment in the way they were seen in the world.

I can’t believe that I have been absent for so long on this blog. I would like to thank everyone that followed me for the last few years and kept checking to see if I had woken from my silence to publish a post. Please have a look at my new project:

Thank you again for all the love, inspiration, and support.

It feels to me that life is a sequence of constant little movements, all strung together. Whether one is out photographing, playing Tennis, or siting through a business meeting, there are constant readjustments that occur. Being able to see, with an inner presence what is coming towards you. The act of waiting, of listening, of feeling the presence of creativity. Inspiration comes in with the breeze, and there are many days that feel airless and heavy with the weight of practicality and productivity.

But other days are blowing gales as I fight to hold onto my camera. 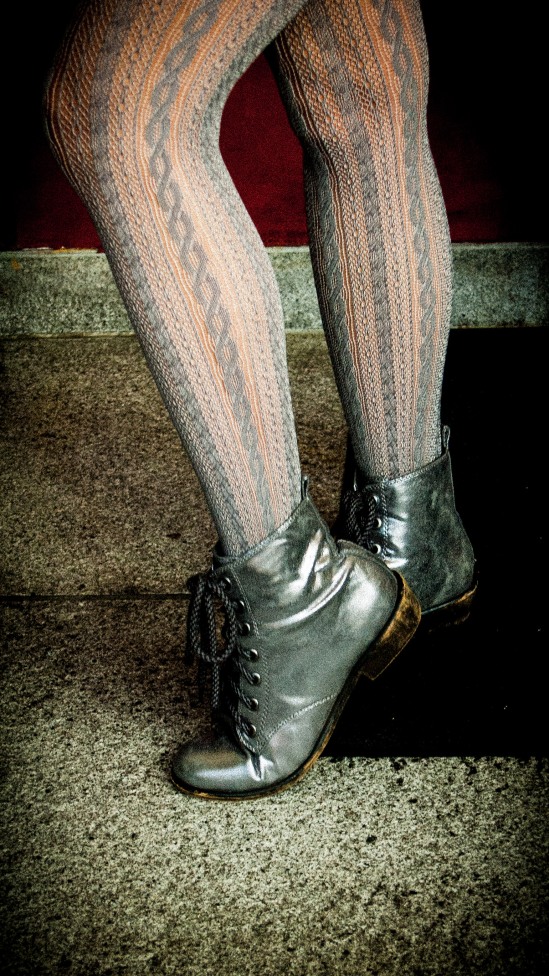 I love playing with contrast. In all parts of my life. What happens when you push light to the extreme, what happens when darkness overwhelms a space? I keep pushing the edges of an image, exploring  what is lying…lurking.. just below the surface of the expected. Come a bit closer, take in all of the highlights and places that shadow can hide. But then…don’t forget to push back, to see all the parts that unite the composition. Can I learn the dotes that connect to form a human being…all by the angle of their head?

Car Shows are always a great deal of fun, and a fabulous excuse for people to have a bit more tête-à-tête time with an open wardrobe and patient mirror.

The one I ended up at was unplanned and wonderfully spontaneous. Thank you Petaluma for having weekend events, practically on my doorstep.

All of the photographs were brilliant. I felt as if on the set of a 1950’s film, boasting dashing men, Red lipstick, and oh so shiny hunks of polished, yet prehistoric metal.

The days are longer and the sun feels just a bit brighter. I have that itch for summer, for playing outside. The last few people I’ve photographed have definitely made me feel carefree and filled with the anticipation of adventure.

Bring on the Color 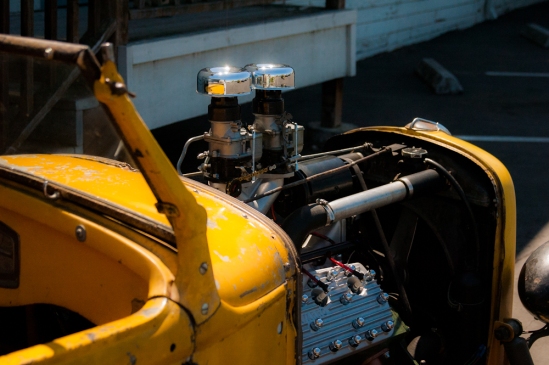 I spent an afternoon in North Beach.

Camera in hand I sought out and enjoyed the retro vibe that feels like such a huge party of the City.

The People on the Street

The Sound on the Street 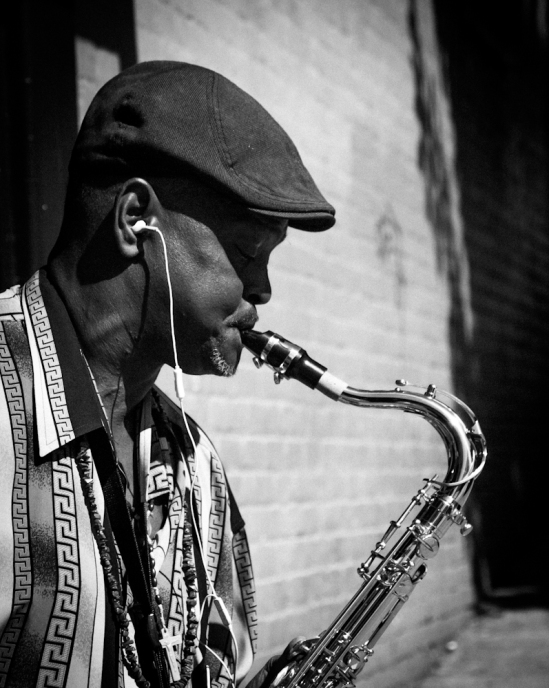 The Past on the Street 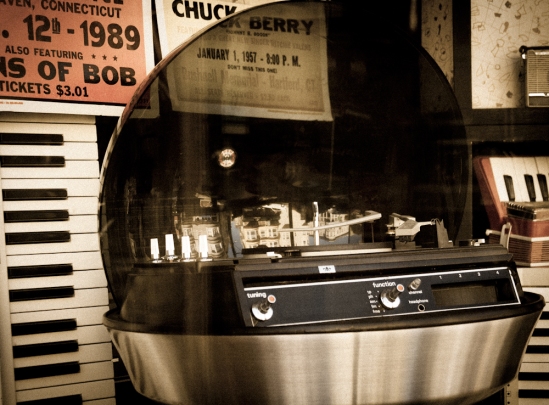 The Alcoves on the Street 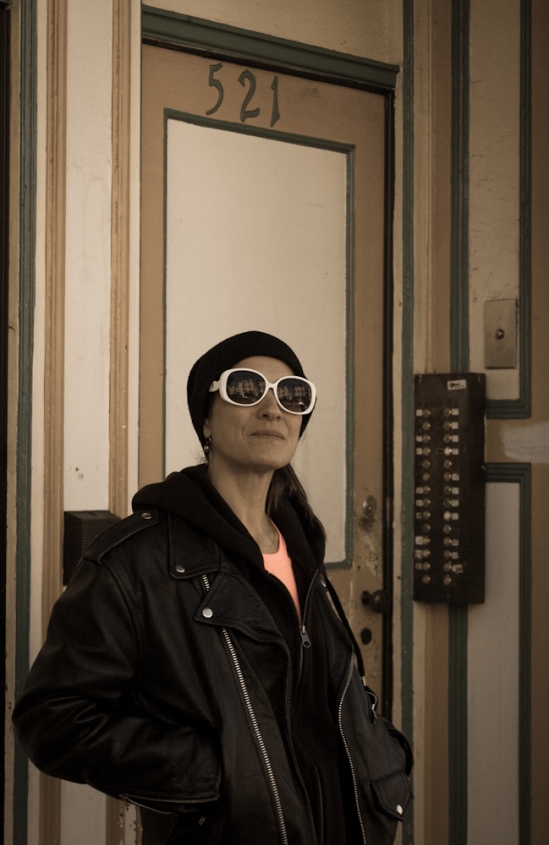 The Word on the Street

The sun lit up the most magnificent Red coat, as I sat drinking my afternoon tea. Like that of a thousand ruby gems all catching the glaring brilliance of sunlight. Saturated and Sated by the color I asked this beautiful woman for a photograph. Gayle was happy to share her fiery cloak- 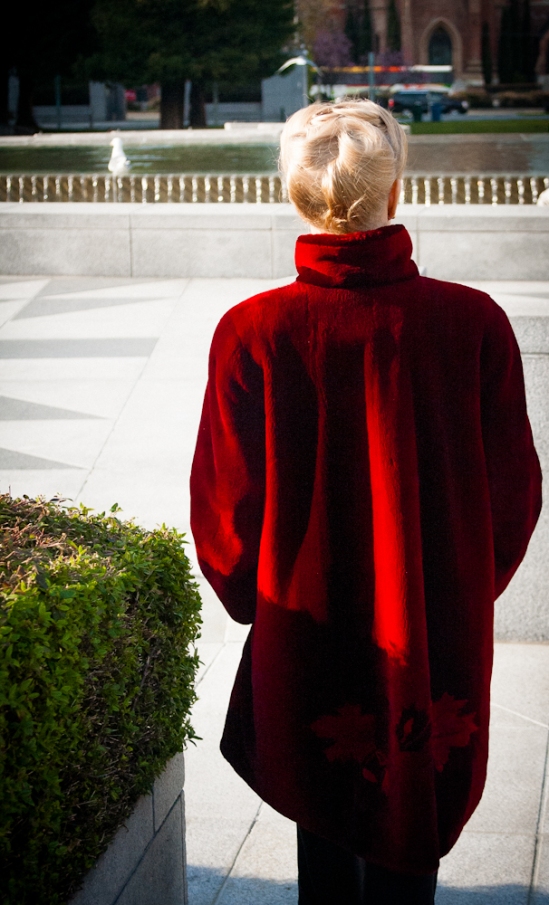 The above photographs illustrates a woman who loves to dress beautifully, for the pleasure of it. To find out more about her click on her name below:

Serious decisions can be made while staying quite warm.

On a brisk day in the Gardens, this young gentleman was not about to catch a chill-While he sorted through the tea menu and decided on which tea biscuits looked most ravishing.

Lunch Break-I profess that I stole a moment from the plum ensconced gentleman. I loved his expression, and sense of purpose. Did I manage to catch that naked moment of surrender with my lens? Because I could feel it hover over us as I snapped away. Hoping to touch an instant, a tingle of it, as I sought out the features of his face-

I must confess my obsession with the Stache. The Moustache that is. If I were a man, I dare say I would have one. And I would try to cultivate it and maintain it in such a way that it would curl, loop, and do a little dance on command.

It would just happen to be my good fortune, but I  have a friend with a curl-tastic Stache. 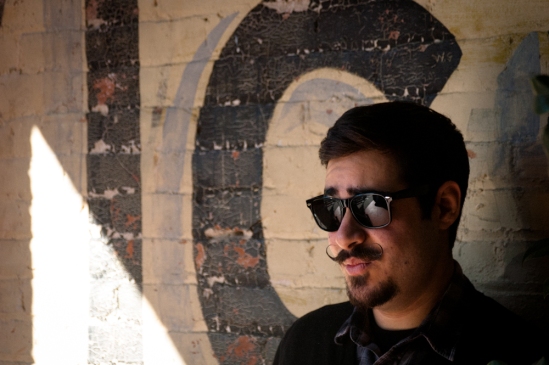 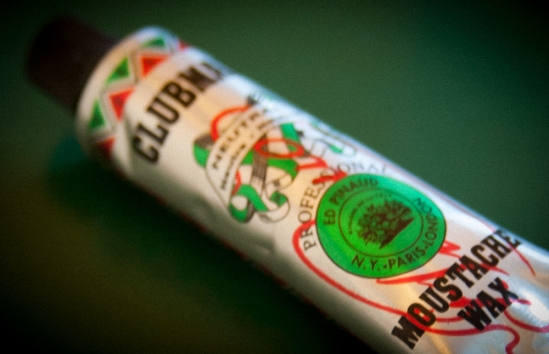 The Stache and I stopped in for a bit of play time at Funk and Flash. Youth and cutting edge beauty was positioned behind the counter. She helped us and played dress up with us for a bit. We partook in frisky, amusement filled clothing touching and hat trying time. I tried taking a few different kinds of photographs of her-She had more than one angle to be observed from. 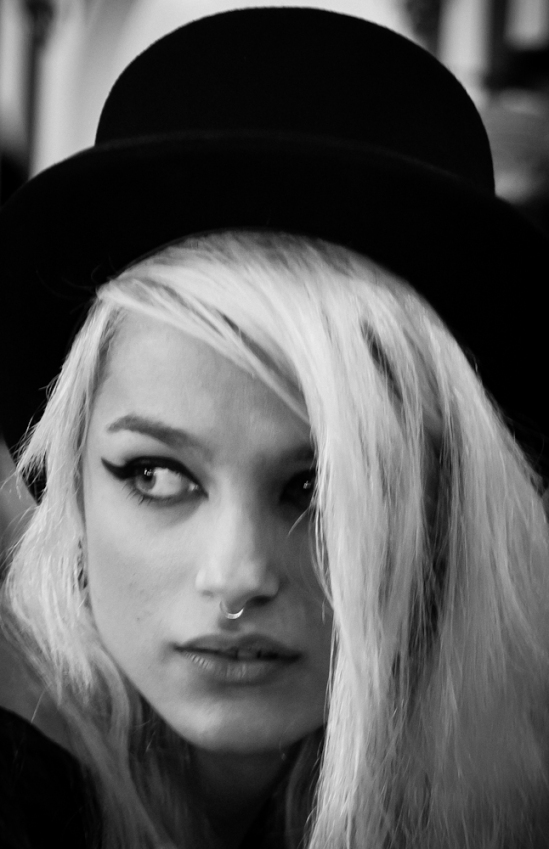 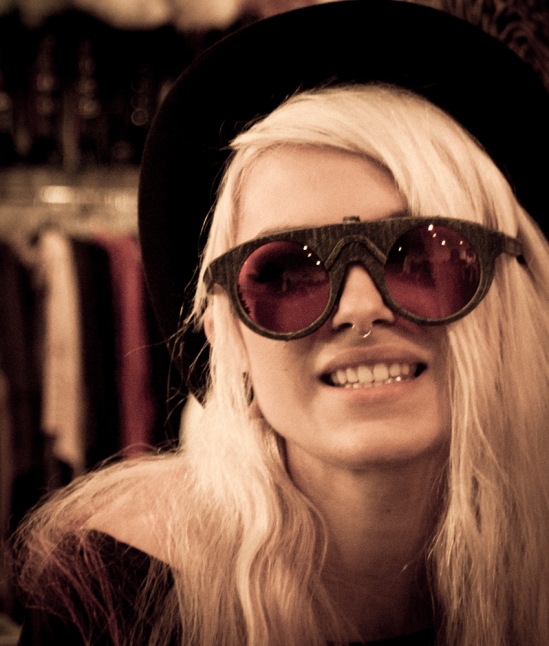